Weather or climate? It pays to know the difference before we slaughter our economy on the climate alarm altar.

“Weather” describes atmospheric conditions at any location – temperature, humidity, clouds precipitation and winds. Every place has its own weather which depends on the time of day, the season, the latitude, local topography and the surface temperature of the nearest ocean.

“Climate” is defined as the thirty year average of weather at that spot.  One week of bad weather is not evidence of climate change, no matter how often the ABC claims that. And adding the word “Climatology” to the name of the Bureau of Meteorology does not magically convert weather men into climatologists.

To determine climate trends requires centuries of reliable weather records.  This is why geologists feature so prominently in determining past climates by mapping earth’s crust and collecting deep core samples in ice sheets, ocean and lake sediments and crustal rocks. (And it explains why climate alarmists alter past temperature records to create spurious warming trends.)

A canny and persistent mathematician/engineer Milutin Milankovitch was one of the first to suggest that changes in various solar cycle orbits and axial tilts cause changes in Earth’s climate. He spent years carefully calculating (by hand) how such changes caused changes in solar heat received by the Northern Hemisphere landmass. He speculated that this caused the advance and retreat of the great northern ice sheets. Since then dozens of geologists, palynologists, astronomers and engineers have confirmed the reality of the Milankovitch cycles.

‘Models” provide the comedy act in the climate circus. Using taxpayer funds and massive computers they build super-complex models designed to prove that global temperature will rise dangerously because of human production of carbon dioxide. These models supposedly prove that the world faces an unprecedented episode of imminent and irreversible global heating.

Firstly, they assume that carbon dioxide in the atmosphere is driven by human activity, and that CO2 drives global temperature. They calmly ignore the moderating effects of oceans, the unmeasured effects of volcanoes and the declining effects of extra CO2.

Thirdly, these models have only one valuable feature – they are known to be consistently wrong.

The assumptions are suspect, the relationships are far more complex than the models assume, and their scary forecasts are worthless. (see results below). 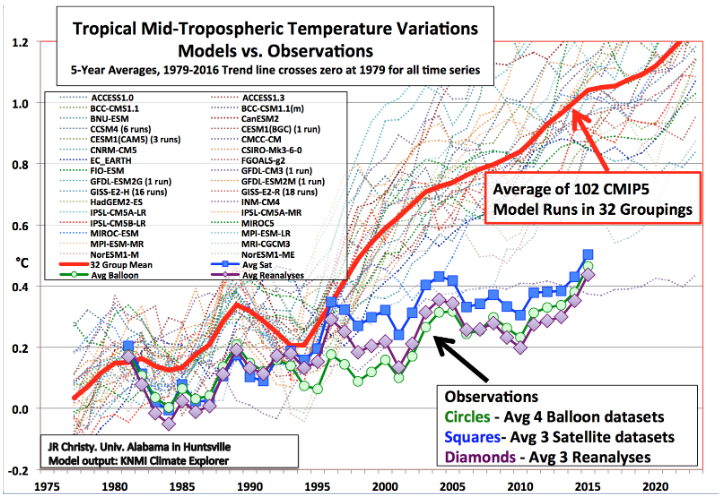 Even if the modelling scaremongers were correct, we would expect a greener earth as warmer temperatures, more carbon dioxide plant food and more rainfall encourage all types of food production, grass growth and forest expansion.

However the Milankovitch solar cycles have not suddenly stopped. The warming top has passed and colder times are ahead. Oceans retain heat longer than land. Warm oceans and cold land can cause massive precipitation of snow, advancing ice sheets and a cold hungry world.

When that happens there will be no electricity from iced-up wind, solar and hydro generators and electric vehicles will soon run out of juice. There will be battles for ice-proof energy like nuclear, coal, oil and gas and a scramble for old diesel generators, trucks and cars.