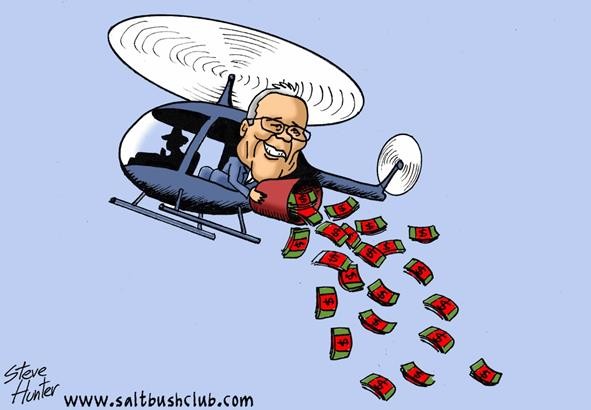 14 March 2020,      Governments seek to revive “the economy” by scattering gifts of our own money wrapped in red tape. This encourages immediate consumption. But this stimulation stops dead when the money tap is turned off. Three simple measures from the three levels of government will create more long term jobs than discriminatory and complicated political handouts that have no lasting effect. Firstly, abolish the federal Capital Gains Tax. Fear of CGT has constipated private property transfer and investment for decades. Most new investors in houses, businesses or farms soon start making improvements – alterations, extensions, a granny flat or new sheds, yards, dams, fences, factories or workshops. But after a few years, owners become satisfied or inactive and capital expenditure dries up. Often they would like to move on but they fear CGT punishment if they sell. Abolish the CGT and its complicated rules and many owners would upgrade to a new property or business and both old and new properties are likely to attract a new cycle of investment and renovation. Making all capital expenditure immediately deductable for tax in all industries would also accelerate re-investment. We would hear the hammers starting within days (as in post-war Germany when Ludwig Erhardt set their beaten people free of tax). Secondly, State governments can accelerate economic rejuvenation by abolishing stamp duty, which is a tax on those who do things. New Zealand abolished stamp duty twenty years ago and the sky did not fall. Thirdly, local governments can help with a six-month rates holiday for all rate payers in shires suffering from fires, flood, drought or corona-virus depression. The feds should fund this. Giving an allowance to people who are forcibly quarantined is reasonable. But most people don’t want a handout – they want a job. We don’t want governments scattering our own money like confetti – we want conditions that encourage people to invest more of their own money in creating real jobs.